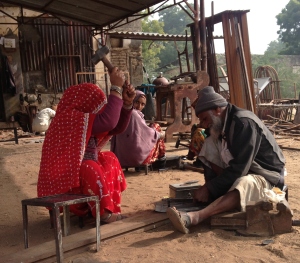 Bunker Roy, the founder of India’s Barefoot College, likes to say that he got the best education in the world and it almost destroyed him. But instead of becoming a doctor or an engineer as his parents expected, he moved instead to a remote village in Rajasthan, in arid west India, and founded the Barefoot College, a “university” for poor, mostly illiterate men and women.

While 40 percent of Barefoot College students are men, the majority are women–primarily grandmothers—whom Roy considers “the ideal change agents in a traditional rural society” because they will take their knowledge back to their local villages and teach the young, rather than seek opportunities for themselves in cities.

“One lesson we learned in India was men are untrainable,” quips Roy. “Men are restless, men are ambitious…Why? Because they want to leave the village and go to a city looking for a job. So we came up with a great solution—train grandmothers.”

Founded in 1972, the Barefoot College builds on Gandhi’s philosophy and lifestyle of simplicity, self-sufficiency and egalitarianism. Gandhi argued that the solutions to the problems that face India are to be found in its villages. Similarly, the Barefoot College seeks to identify the knowledge and wisdom of villagers that can be tapped for their own development; only when that know-how is insufficient do you bring in knowledge from the outside.

One key example of how the college taps “village wisdom” is its approach to developing reliable sources of drinking water. At first, the college promoted the drilling of wells in desert villages, which required relatively expensive hand pumps and, over time, drilling ever deeper wells. Eventually, Roy consulted village elders who suggested an alternative that had been used in Rajasthan for hundreds of years—collecting rainwater. The barefoot college now promotes the development of rooftop systems for collecting rainwater.

I recently visited the Barefoot College’s twin campuses in the village of Tilonia as part of a two week tour of Rajasthan–my first trip to India. As a longtime student of the top-down, hierarchical culture that characterizes many American institutions—from corporations to schools—I was intrigued by the Barefoot College’s emphasis on bottoms-up solutions. I was also taken with its focus on both the grandmother-as-change agent and the wisdom of elders. (After all, in the U.S., experience is not always valued–in business, politics or education where K-12 “school reform” often means staffing schools entirely with 20-somethings, from the principal’s office down to the classroom.)

To get to the Barefoot College, our group traveled an hour and a half from Jaipur, the last several miles down a rutted dirt road amid wheat and mustard fields. We found an 80,000 square-foot campus of neat single-level buildings built around tree-shaded courtyards. The tree-lined roads and pathways of the campus are almost completely devoid of the refuse that mars almost all of India’s towns, roads, waterways and even many of its most beautiful monuments. The campus was built–and continues to be upgraded–by mostly illiterate architects and engineers who have installed a fully sustainable solar-based electricity grid capable of powering, among other things, over 500 lights, fans and at least 30 computers. 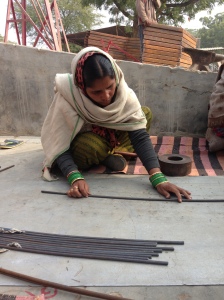 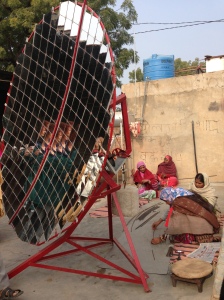 At the college, we found a beehive of activity, much of it centered around electricity generation.  A key idea behind the sustainable electrification program, is to make villages completely independent in meeting their electrical needs, including installation, maintenance and repair. Villages that have invited Barefoot College to provide electrification agree to pay a modest monthly fee to support maintenance and repair, in addition to selecting a local resident—usually a grandmother—who will spend six months at the college receiving training.

The Barefoot College has electrified 600 villages in India alone, according to Roy, as well as about 25 other countries, including Afghanistan.

Another important ancillary business involves building solar cookers that are stunningly elegant in their simplicity. Roughly half of the world’s population relies on coal and biomass fuels, including dung, for home cooking and heating. Yet, methane emissions (from dung, for example) are the second largest cause of climate change after carbon dioxide, according to the Global Alliance of Clean Cook stoves. 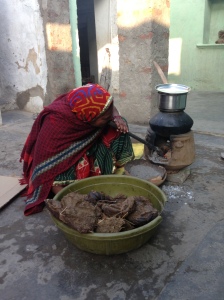 A dung-heated cooker in another Indian village

By contrast, the cookers built at Tilonia–large hula hoops of thin, hammered metal piping, which frame convex quilts of cheap commercial, sun-and-heat-absorbing mirrors wired together and connected to a box lined with an aluminum-foil-like material—are completely green. The cookers heat up to over 350 degrees farenheit.

The college provides training in virtually all the skills needed for village self-sufficiency. Our group met students of dentistry and acupuncture (who treated the chronic knee pain of one member of our group.) Students also are trained in midwifery, water testing and weaving. Recently, the Barefoot College has begun to train handicapped women in building educational toys and manufacturing sanitary napkins. 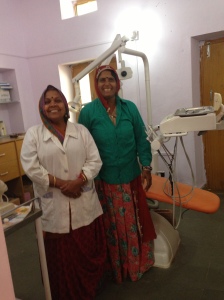 For example, in one skit, a menacing over-sized puppet head of a policeman arrests a villager, and explains, mockingly, that a fine will cost 1,000 rupees with a receipt, but just 100 rupees without one; transparency and fighting local corruption are key aims of the college’s educational efforts. A kindly, wise farmer-puppet, meanwhile, imparts useful information about farming techniques and the dangers of global warming. Then there is Moofat, “Mr. Outspoken,” who raises controversial issues, such as domestic violence and the importance of sending children to school. 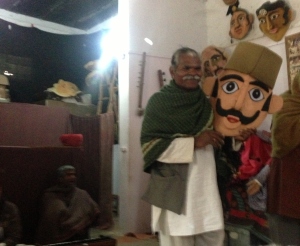 The puppet shows also are used to make villagers aware of the minimum wage—$2.18 and $3.40 per day, depending on the region in India. In one instance, the Barefoot College helped villagers bring a case against the Indian government, which resulted in a precedent -setting Supreme Court case in support of the minimum wage.

In keeping with Gandhian principals of austerity, most of the people who work and teach at the Barefoot College make little more than minimum wage.

The college defies many local traditions and respects neither religious nor caste barriers. Initially, says Roy, the college faced some resistance when Dalits, so-called untouchables, were assigned cooking tasks. But Roy insisted they overcome their reluctance.

Pragmatism also informs many of the college’s programs. For example, recognizing the realities of village life, the college has developed a “night school” educational system for children who work, for example, as shepherds in traditional villages and who would, otherwise, not be educated at all. Electrification, of course, is a key requirement for the night schools.

Some 215 students work and learn at Tilonia’s two campuses, which are situated about 1.5 kilometers apart. Most of the women are between 35 and 55–officially the maximum age allowed by the Indian government. (The women who come to Tilonia for training from outside India–mostly Africa–come via a government-sponsored Indian Technical and Economic Cooperation Programme of the External Affairs Ministry.)  As a practical matter, since many students, who come from as far away as Papua New Guinea and Sierra Leone, don’t know their ages, a number of the women are older. Instructional videos and sign language help bridge the language barrier among the students who hail from a dozen countries. 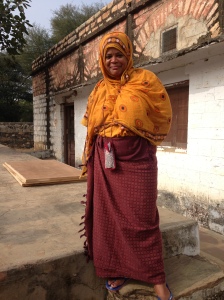 This student from the Comoros Islands is studying electrification

I couldn’t help wondering about the challenges faced by women who return to their villages with their new-found knowledge and self-confidence. Since they usually arrive home several weeks before the electrification equipment that they are in charge of assembling, they face much skepticism at first, concedes to Meagan Fallone, who heads global strategy and development for the college. Though, Fallone insists, that skepticism evaporates as soon as they get their first projects up and running.

While the Barefoot College has won global recognition—Bunker Roy received the Clinton Global Citizen Award for 2013–it operates on a relative shoestring. The college’s assets totaled $3.4 million in fiscal 2012.

Interestingly, while the Barefoot College receives funding from a range of international organizations, it says it does not seek funding from the Bill and Melinda Gates Foundation. Among the college’s “non-negotiables”, says Fallone: She won’t divert funds for the costly grant-writing process necessary for securing Gates funding. Nor does the college believe in Gates-style “measurement of deliverables.” It would be “absurd for us to reorganize ourselves to fall into their complicated reporting requirements,” says Fallone. Instead, she says, Barefoot College dispatches volunteers to villages around the world to assess their impact.

I am hoping to learn more about how the Barefoot College assesses its impact.

I’m also curious to learn more about the extent to which the Barefoot College provides a rebuttal to the top-down solutions imposed on schools, families and educators by American education reformers. Instead, the Barefoot College is based on faith in the “competence of ordinary people” to help solve their own problems.