Non-participation is Not An Option at KIPP Infinity in Harlem

One of many criticisms leveled at charter schools, most of which are not unionized, is that teachers suffer burnout because of the tough workloads. Indeed, most charter schools keep much longer hours than do traditional public schools. KIPP-affiliated schools, for example, typically start at 7:30 and don’t end until 5 p.m., at which point teachers still need to grade homework and finish preparing for the following day. Saturday school adds another half-day to the work week. And charter schools, typically, have a longer school year with some mandatory summer classes.

Joseph Negron, the founding principal of KIPP Infinity, which opened its doors in 2005, addressed the burnout problem head on. Negron, who recently resigned as principal to return to teaching–also at KIPP Infinity– shortened the school day by an hour, moving dismissal to 4 p.m from 5 p.m. He juggled the Saturday schedule so teachers would only have to teach three or four Saturdays per semester.  And he allowed teachers to come in late one morning per week. “The most important thing is hiring and retaining great staff,” says Negron. 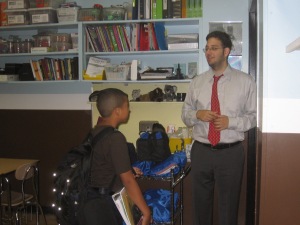 On the day of my visit, I arrive at 7:25, in time for morning meeting in the school auditorium, and am met by Peter Croncota, the director of operations, who hands me a schedule of classes and invites me to drop in on any class I wish to see. I begin with Negron’s fifth grade computation class—all fifth graders get two periods of math each day, one to bolster their computation skills and the other to work on problem-solving. There are 40 students in each computation class—by far the largest class at KIPP Infinity.

The class is starting to study estimation. Negron writes a problem on the board: 289 + 433=

“Raise your hand if you have the actual answer,” says Negron. “Now in unison.”

Most of the class calls out loudly: 722

Negron then asks the class to estimate the answer by rounding each number to the nearest 100. Then to the nearest ten. One child offers: 290 plus 440.

He gives the students a more complicated estimation problem to work out on their own. After walking around the room for a few minutes as the students work silently, Negron says: “Brandon just asked me a brilliant question. Brandon tell us your question.”

“Since the two numbers are in the thousands, can we round to the nearest thousand?” asks the boy.

Negron pauses. “You totally can,” says Negron, bouncing on the balls of his feet. “DONT be a robot. Everyone do a robot.”

The entire class moves its arms in jerky motions. Giggles break the silence.

“I try to get them through the most passive parts of the lesson,” explains Negron who uses a whole repertoire of clapping and chanting rituals in his class.

“Research shows that kids’ attention span is their age plus two; in fifth grade that’s 12 minutes. But you have a 65 minute class.”

Negron once had every teacher follow the schedule of a child from the time he woke up at home until he left the school in the late afternoon. It was “much harder” being a kid and sitting through a typical KIPP day than the teachers had thought, explains Negron. The upshot was more time for movement, socializing and more frequent bathroom breaks.

Back in his computation class, virtually every student appears to be on task. A dozen hands pop up every time Negron asks a question. “Sit up,” Negron admonishes one child when he starts to slouch.

Only one boy sits hunched over, his head bowed, not participating. He doesn’t respond to questions. He doesn’t clap.

Negron slips him a note: “Is everything o.k.?”

The boy snaps his pencil in two.

“I am super frustrated Manuel*,” Negron finally says to the boy in front of the class. “You are too old for this. I’m just being honest.

“You’re going to choose not to be part of this team and family? Do me a favor, go outside. Take off your KIPP shirt. ‘Cause if you’re not going to be part of KIPP… How dare you come in here and wear a KIPP shirt and not act like a KIPPster. I got people in here who haven’t earned their shirts yet, who act more like a KIPPSter.”

At KIPP there is no tolerance for defiance. Students attend summer classes to learn the rules, which include—sitting up straight, responding politely to both teachers and students, handing homework in promptly. KIPP uses a paycheck system to reward and punish students. To earn privileges, including the right to wear a shirt with the KIPP logo as well as year-end trips to New England and Utah, kids need to maintain a $40 average in their paycheck accounts; each student starts the week with $70 in his paycheck. Small infractions, like calling out when it’s not your turn, get deductions of $3. Missing homework gets bigger deductions. Manuel’s act of rebellion, I later learn, zeroed out his account for the week.

I wander down the hall and drop in on a writing class taught by Frances Olajide, a three-year KIPP Infinity veteran. Unlike the rows of desks in Negron’s classroom, the desks in Olajide’s class are arranged in a “U”, around a navy rug. After giving students a few minutes to write in their journals, Olajide asks the class to sit on the rug and to look at images of sunflowers, which she projects on her white board; the sunflower photos are meant to serve as an inspiration for a creative writing assignment. “We move to the mat silently so we can do it quickly,” says Olajide softly, adding: “The most successful people in the world sit in the front where they can see and participate.”

Olajide is an African-American woman dressed this day in a trim black skirt and fucsia sweater. There is no clapping or chanting in Olajide’s class. But the class of 27-or-so students do as they are told. Later, when one boy has trouble starting a writing assignment, Olajide prods him gently: “Try to write just two sentences.”

In the eighth grade hall, Jeff Li and Gerard Griffith, share a classroom with a basketball hoop in one corner. Li, who is Asian and served as co-principal of KIPP AMP, a charter school in Brooklyn, is teaching math. At the end of class, he gives his students a few minutes to shoot hoops. 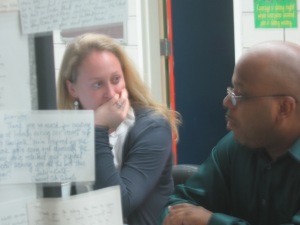 Allison Willis Holley, the new principal and Gerard Griffith, both long-time KIPP Infinity teachers, chat at Holley’s desk, which is located in a school hallway

Eventually they get to “secession”.

Griffith loads a Youtube video onto the whiteboard. The screen shows the rapper and professional wrestler R. Truth (aka Ron Killings) wearing a grey confederate uniform, wielding a sword and marching down one aisle of a crowded arena. Inside the ring are a wrestler and Vince McMahon, CEO of World Wrestling Entertainment (WWE).

“I did my homework,” declares the rapper.  “I be in Richmond, Virginia, the capital of the confederacy. This is where Jefferson Davis and Robert E. Lee and a bunch of other inbred rednecks just like you…”

“Nothing good ever came out of the South,” continues R. Truth adding emphasis to key words. “The Confederacy, they did have one good idea: Secession. The confederacy seceded from the US. So tonight R. Truth is seceding from the WWE universe.”

“What’s ironic about the uniform that R. Truth is wearing,” Griffith asks his class.

“You can say it,” encourages Griffith.

“Because he’s black, and that’s a confederate uniform,” calls out one student.

R. Truth’s performance will not be his last on WWE. Nor are the KIPP Infinity students likely to forget the definition of secession.

The teaching styles of KIPP Infinity teachers are as diverse as the faculty itself. “We want to make sure that as much as possible that the teachers reflect the background of our kids,” says Negron. Virtually all KIPP Infinity students are black and Latino. About 90 percent are poor enough to be eligible for free or reduced-price lunch.

The vast majority of teachers hired at KIPP Infinity already have several years experience under their belts. Once they get here, few of them leave. The turnover rate for teachers with fewer than five years of experience was just 14 percent in 2009/10 school year, the last year for which statistics are available, down from 27 percent two years earlier. A glance through an old yearbook shows that many of the current teachers also appeared in the 2009 edition. But many have taken on new duties.

Indeed, in addition to holding on to its teachers, KIPP Infinity seems to have tackled another key management challenge—succession planning. When Negron decided to return to his first love—teaching–he identified Allison Willis Holley, a long-time non-fiction studies teacher at the school to succeed him.

Holley has continued to tweak the teacher schedule, still with a view to avoiding teacher burnout. She has extended the school day to 5 p.m. for kids who need extra help with reading, and is introducing a new reading enrichment program that she hopes will bolster literacy as the school where math scores consistently outpace student performance on ELA. In exchange, she has eliminated Saturday school entirely.

In 2011, 41 percent of KIPP Infinity students received 3s or 4s, the top two scores, in the state English tests while close to 84 percent scored 3s and 4s in math. Roughly 10 percent of KIPP students are held back each year.

I wondered what would happen to a defiant child like Manuel, who is new at the school this year and who is having trouble adapting.

Negron assures me that Manuel is back on track. He spent the rest of the day “cooling off”, but is now back in class. Negron asked one of the other teachers to talk to Manuel who, the teachers believe, is suffering from separation anxiety.  Negron and the boy then had a discussion about what they both wish they had done differently. “He said he wished he hadn’t thrown his KIPP t-shirt,” says Negron. “I told him I wished I hadn’t raised my voice.”

But Negron also tells me that he had to draw a line. “I had to make a decision,” he explains. “Every kid is seeing him not participate.”

After my first day at KIPP, the one conclusion I could draw was that KIPP Inifinity non-participation is not an option.

*I have changed the name of the student to protect his identity.

Please stay tuned for an upcoming conversation with a KIPP Infinity parent on KIPP curriculum, discipline and raising kids in Harlem.

This entry was posted in Education. Bookmark the permalink.